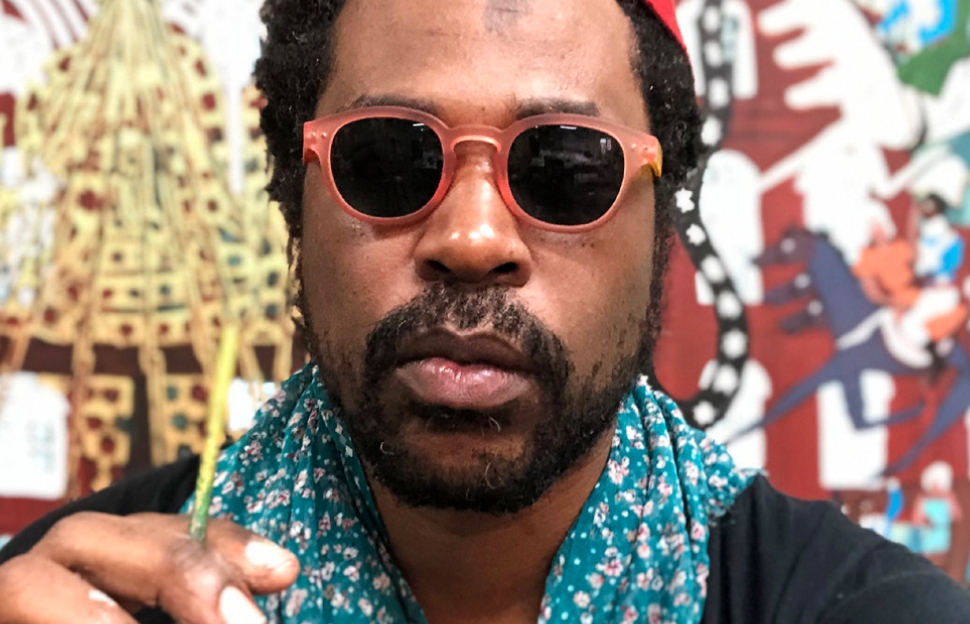 We are two minutes into our interview with Umar Rashid, famously known in some art circles as Frohawk Two Feathers, and he references the “malleability of history.” At this point, what you need to know about Umar is his adoption of a practice that is both loose and intricate, as if he is talking about the malleability of art as we know it. His research interprets the literal and figurative as he unearths new histories among our oldest stories and everything in between. It’s a rare capacity to speak freely about one’s identity and feel confident enough to challenge what that self is. But he is Umar Rashid, and he knows he has one shot. So while he’s at it, and luckily for us, he will decorate our world with a passionate sense of purpose and unique position of individuality. With a new solo show, En Garde / On God, opening at Blum and Poe in Los Angeles on November 6th, we look back at our Fall 2021 Quarterly conversation with Umar.

"You can be anywhere in 24 hours on this planet. The journeys that we take these days are more introspective."

EP: How often, as you look through history books and research, do you think, “I did not know this." And when this happens, how does it change your perception of where the show's going or where your consciousness goes?
Every day I find something new to be wowed by, and that's what keeps me going, finding new things.
EP: With all the ways you approach your practice and make art built into these stories that you're researching and telling, has anything changed in terms of the attention and collector bases having changed in the last couple of years?
Yeah. I think what I'm doing is kind of leveling out. Normally, my M.O. was always to create, to just move so far in the future. My friend, the rapper Serengeti, once observed something about me that I felt was very accurate when he said, "Umar lives in the future and comes back to the present to give his own power presence." So I literally don’t live here. I'm so far, I try to stay so far ahead because I don't want to be caught in this wave of... reactionary shit. I hate reactivism. I want to be able to come from a position of strength and to come from a position of absolute, to talk about these things in a way in which they need to be talked about right at that particular time.
I think that the problem with most revolutionary activities is that they are always reactionary. You can't be reactive. You have to be proactive in your revolution. You can't be reactive in your revolutionary ideals. So I'm being proactive. I'm taking a stance. I'm not saying that this is the only stance that can be taken, but I just choose to show people what can happen, the possibilities that can happen, and also illustrate what has occurred, and get people into history and knowing what our history is, and to try not to fucking repeat that shit.
Maybe not much can be said for us. Maybe we're fucking doomed. I have no idea, but we're going to have a good time because, like I said in the beginning, you're going to be Evan once, you're going to be Doug once, and I’m going to be Umar once. Everything comes back full circle at some point. But, as far as collectors go, I think that's more of a market thing than it is about my work. I don't think anybody's just like, "Oh man, this guy's brilliant,” or, “This guy's a total fucking dick,” or, “This guy really loves Himalayan rock salt." But who knows?
DG: Was this idea of revisionist history something that's always been with you, or was there a kind of a Eureka moment?
Writers get writer's block, artist’s block, and I just wanted to have something that I made that I could do for the rest of my life, and this is what it became. So it was a Eureka moment, but it was also a moment in which I just kind of planned out my future. I made something that I could do forever and ever.
@frohawktwofeathers