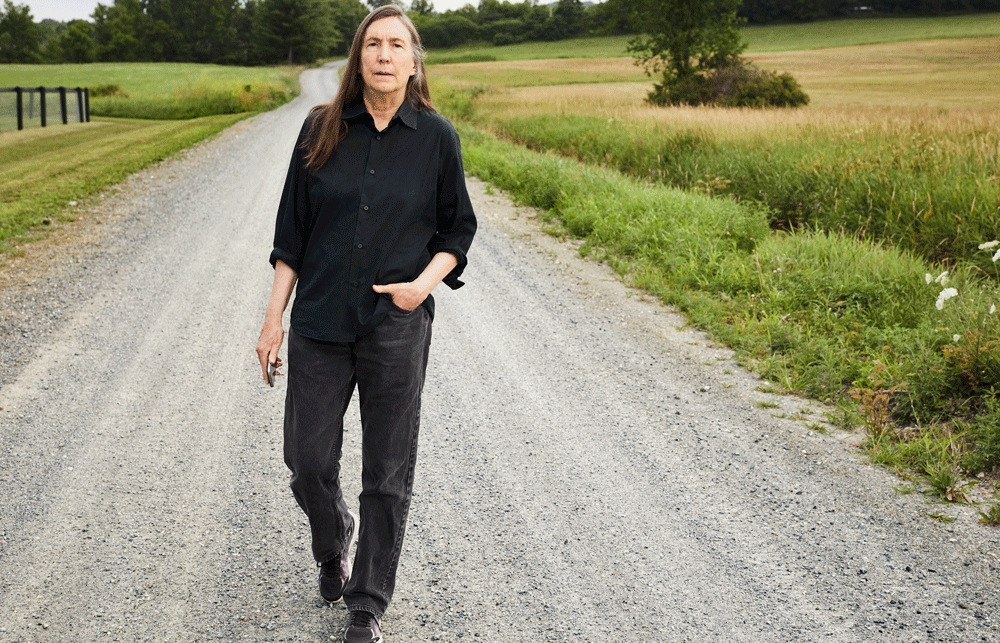 Long before these kinds of relatively small-scale light boards became a ubiquitous urban architecture of intrusive advertising, let alone a welcomed presence in the contemplative hush of our cultural institutions, Holzer’s text sculptures (similar to the inscribed marble sarcophagi she produced as a kind of memorial statuary during the AIDS crisis) commanded our deficient attention because her art is predicated on understanding the power of words. Maybe, as they say, no one reads books anymore, but the sound-bite illiteracy of our culture is now written in the stupid tweets of angry and uninformed fools. Holzer may address art history in all of its complicated and contradictory legacy, but she’s really talking to anyone who still can stop to read a sign. When Holzer first began putting her words in the streets it was on a blank canvas of abandonment; today she fights against an endless stream of cajoling and co-opting commercialism. She’s upped her technological game to be heard in the din, working words as a kind of deafening silence to make us actually think about things, if only for a moment. She’s not done with technology, producing augmented reality projects, unexplainable to a Luddite like myself, and even confesses to having done an NFT – “Do I want applause or forgiveness for this?” she asks – but while the conveyance is a matter of art, the content is about something more. Call it memory, poetics or urgency; it is what needs to be said in the silence of selective amnesia.

Providing eye candy for the bitterest of pills to swallow, Holzer has, in the past few years, mobilized fleets of LED sign trucks to fight for gun control using the words of Parkland shooting activists, and to advocate for voting initiatives and social justice with the words of Stacey Abrams and John Lewis. During last year’s climate summit in Glasgow, she projected scathing texts about our environmental precarity onto the building housing the conference, as well as other facades, translating the invective of Greta Thunberg’s “Blah blah blah” into a searing condemnation of our collective inaction and cynicism. At this point she seems happiest working with the words of others, be they activists, thinkers, public figures, as well as the wordlessness of documents redacted into oblivion. One of the most amazing series I saw in her studio, not yet publicly exhibited, recreates ancient Greek and Roman defixiones, or curse tablets, now featuring texts from Trump presidential tweets. She says she’s not a very good writer–and that kind of stings me as a one of lesser talents, but it is in keeping with an artist whose career has often been predicated on modes of partnership. “I rely heavily on collaboration in both my social and professional life,” she tells me. “I ran into Colab” – short for Collaborative Projects, a loose-knit collective of socially engaged artists that emerged in Downtown New York during the late seventies and included a stunning array of important artists like Holzer—“not long after I arrived in New York, and I co-organized the Manifesto Show with Coleen Fitzgibbon for them in 1979.” By now it seems that this manner of collaboration extends beyond the valuable kinds of conversations among artist communities, or even finding new ways to make her art, to what she refers to as “reaching bigger audiences.”
For no good reason other than it might discomfit an inherently private and often guarded artist like Jenny Holzer, I choose to end this brief survey of where she currently is with something quite personal. It is not to say how beholden I am to her art, which has been something of a North Star to me over the decades, but to mention a couple very odd commonalities we share as truly different people. They’re really none of your business, but since Jenny has done a lot to teach the world a bit of empathy, maybe some of you can relate. We both suffer terribly from insomnia, the most wretched kind of restlessness imaginable, and undoubtedly related to this, both watch way too much TV news. Though Holzer punctuates her news binging with (yikes) lots of true crime murder shows, unlike me, she actually tries to sleep with the news on. “In a bleak way I kind of benefit from the watching,” she explains. Is that TMI? No doubt, but Jenny Holzer has made a fine art out of our incapacity to deal with too much information, and in doing so, has helped us all navigate the impassable conundrums of our world disorder with words that are somehow soothing in their provocation, reminders of our frailty and endurance, written with an abiding compassion and, when necessary, a righteous rage.
@jennyholzerstudio